In the past few weeks in the Philadelphia area, where I have my primary therapy practice, there have been a number of arrests related to the hook up application (“app”), Grindr.  On May 1, 2014 a young man was found murdered after meeting someone with whom he connected on the Grindr app.  The person he was meeting for the hook up is a suspect.  Even today, in the news, a man was arrested in Seattle for beating another man he met on Grindr.  The most eye catching story from the Philadelphia area is that of the arrest of a Delaware Deputy Attorney General who is being charged with four counts of fourth degree rape, based on sexual encounters he had with a teenage boy he met on the Grindr app.

My purpose in relaying this news is not to be sensational but to use these extremely unfortunate incidents as a teaching moment.  Grindr is technically an app that is for those over the age of 18, but they do not monitor the ages of those people using the app.  We know that there are a number of underage boys using this app.  Given this use, parents need to know about the app and if their child is using it.

What is Grindr?  Grindr is a mobile app that was introduced in 2009.  It is now the largest and most popular all-male social network app that is location based.  The company website (www.grindr.com) states that there are over 4 million people using the app in 192 countries around the world. What the website does not explicitly say is that this is mostly used as a hook up app.  The site allows you to find people who are open to and looking for consensual hook ups for sex.  From a sex positive perspective, it allows gay men to find other gay men who are interested in the same thing. This can be very helpful for someone who is shy or perhaps in a remote area where it is not socially acceptable to be openly gay.

As with anything, when there are positive aspects, there are also negative aspects.  The sites policy does state that there is an age restriction, which is 18 or 21 depending on country.  By accepting the terms of service, you are stating that you meet these restrictions.  However, it is not monitored.  Therefore, like so many other apps, with a click of a button, a 15 year old can be on the app interacting with adults who are looking for sexual contact.  Whether the adults on the site ever find out that the minor is actually a minor is unknown.

From a prevention standpoint, there is a lot to learn from these recent incidents involving the app Grindr.  The first main point is that anytime we are using social media, meeting people or giving out our personal information there is some level of risk involved.  We never know what the other person’s issues are or what they are going to do with that information.  I do not ascribe to fear mongering, so this is not meant to be shocking, rather realistic. Though most meet ups from these types of sites end without any violence and are between two consenting adults, it is not always so.  If an adult is going to engage in anonymous hook ups, they need to take safety precautions.  This is often difficult as these behaviors are frequently done in secret so others do not know where they are going or who they are meeting.

When it comes to minors and prevention, a grander lesson can be learned.  In doing some research on this topic, I came across a forum thread about using Grindr as a minor. The underage young man knew he was not supposed to be on the site and wanted to know what happened if he got caught by the app maker.  The replies that followed implied that the forum members were well aware that those under 18 were not supposed to use the application  (to do what?  Be on the app?  Be contacting people?, be specific) and if they did, they were going to meet up with adults.  There was an implicit acceptance of this fact without an apparent understanding of what that meant for the teen.  The one response who did mention legal issues, stated that the adult would get arrested, so it was not an issue to be underage and on the app. Of course, this is one forum column about the issue and not necessarily the main stream thought. 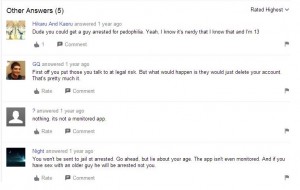 As a parent of a minor, you need to know what your children are doing online.  If you see this app, or one that is similar (tindr, etc), you need to address the issue with your child.  Be aware of what the apps are and how they are used.  These are good communication moments to discuss what is healthy dating and sexuality.  The forum member who suggested that it was no big deal to have sex with an adult does not understand the psychological implications as well as what the impact of a long drawn out legal case is on a family.